Today we are leaving Vietnam and are going to Siem Reap, Cambodia.  Five days in Vietnam and I need three things, 1.  A dark quiet room to decompress  2. Mexican Food and 3. New undergarments.   The above video shows us trying to cross one of many streets.  I’m actually going to miss the thrill.

The Vietnamese People are wonderful, polite and genuinely appear to be glad to see you.  In an earlier post I talked about the scooters.  If I remember nothing else, it will be that.  10 million people in Saigon, 7 million scooters.  I’ve included a few more pictures showing that there is no limit to their brilliance.  The first picture shows an Uber driver waiting for a fare…Uber on a scooter, wow. 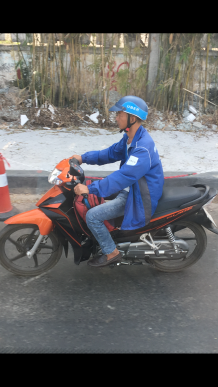 Vietnam is a beautiful country and well worth the trip.  I would do it again and perhaps go to Hanoi in the north.  Hotels, restaurants and transportation are easy.  I have had a harder time going to Dallas then I’ve had here.

A parting thought, I found a man who was about 50 and he agreed to answer a few questions from an annoying American about his thoughts on the Vietnam war.  He told me that his father died in 1972 fighting along side the Americans in Da Nang.   He said times were hard after that but that he and his family had adjusted and moved on.

Then I asked the hard question.  Does he feel that we (America) made a difference, was it worth it?  I cringed as the last of that sentence left my mouth as I had no idea how he would or could reply.  He thought about it and said, when the war ended, we (Americans) had made a lot of mixed raced children and that at least we took them to America and didn’t leave them behind to suffer.

Of all the things he could have mentioned, this apparently, was top of mind.  He then just shrugged and walked away.   I was speechless.  I had imagined him talking about human suffering, life in a war zone or of the loss of his Father.   Nope, he said what he said and that was that.

After I thought about it, I was really glad I was here.  Meeting people of other cultures is a wonderful “eye opener”.  I really liked Vietnam and clearly I have more to learn which can’t be done from sitting behind a computer.  I want to meet more like him and I want to be as thoroughly confused by every answer they graciously give.  That for me, is the best starting point in truely seeking to expand my narrow American mind.

Avid World Traveler who uses Points and Miles to enhance the Travel Experience. If you want to learn how, follow my Blog for Tips, Reviews and Ideas to get started.

This site uses Akismet to reduce spam. Learn how your comment data is processed.

Listen to your inner self..it has all the answers..

Breaking news and thoughtless commentary on the world.

A Library In My Luggage